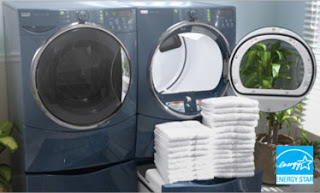 When a shoot is planned and staffed well, even if things don't go as expected, it can still be a joy to work on. Case in point: Friday, I did location sound for a video that will run in Sears' new "Laundry Gallery" in-store displays.

I often do local commercials with the producer who was in charge of this shoot. He's never been bad to work for, but being local commercials, the small budget and tight time constraints usually have us doing things we would have done differently on a larger shoot. This national job was really a pleasure.

The first thing I noticed was that the crew was larger than the two-person local commercial shoots I'm used to. That was good since we shot in three locations in two cities that day. One was all dolly shots and another was beside the Savannah River in a part of town I didn't even know existed.

The shooting schedule changed a couple of times during the day, since the weather didn't exactly turn out like the forecast, but we never got behind. The actress we worked with performed well and was upbeat and kept the energy high on set all day.

In addition, I got to see the last video I worked on playing on the in-store display while we were shooting in a Sears store. The Sears in the Augusta Mall doesn't have a "Laundry Gallery" display, so I hadn't gotten to see the other one yet.
Newer Post Older Post Home